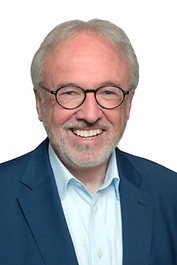 Mr Rudolf Henke is an internist and since September 1988 assistant medical director in the Clinic for Onco-hematology at St.-Antonius-Hospital Eschweiler. He started engaging for the Ärztekammer Nordrhein as board member in 1988 and is its president since 2011. Since 1995 he is board member of the Bundesärztekammer and was elected first president of the Marburger Bund in 2007 after being assitant president for many years. After 14 years in the Landtag of Northrhine-Westphalia he was elected Member of the German Bundestag. There he serves in the task forces for health and education, research and technology assessment. Since 2014 he is assistant president of the health task force of the German Bundestag.